Love Locks on the Ha'Penny Bridge

Okay, new travel tip learned. Forty-six litre backpacks make terrible bunkmates. After my buzzy night at the pub, I had fallen asleep in my bunk with my backpack still bike-locked to the bed from the day before. Now I had one leg tangled in a shoulder strap and a kink in my shoulder that I was now sure had set up camp for a while. I fumble for the snooze button on my alarm, trying to remember why I set it in the first place. Oh that’s right, the walking tour. It seems kind of hokey to me really, but the travel sites swear that they’re actually pretty fun and a great way to find your way around the city. Ugh, it better be pretty good to deserve waking up before noon on my first full day of vacation.

Trying to shake off the soreness and grime from the last two days, I hustle into the shower. A nice hot shower is all I want right now. Of course, many of you know where this little tale is going. Though, on the other hand, there’s no better wake-up call than a brisk, cold shower. The universe and the overburdened water heaters decided that’s really what I needed this morning. I washed myself with the speed of The Flash and hopped out, wrapping myself in my extremely light, but not very warm, travel towel. At least it soaked up the water quickly, thus lessening the double-layer of goosebumps I was now sporting. Now freezing but awake, I decided to skip the hostel breakfast and treat myself to a comfort of home before I headed out on the walking tour; Starbucks. That sweet double shot of over-roasted espresso and sugary soy milk is confirmed to be exactly the same no matter where I am in the world. Call me basic, but as a loyal addict since the age of 14, this chain will always hold a special place in my heart.

Freshly caffeinated, I head back to the hostel to meet up with the walking tour. We all congregate, most just as bleary-eyed as I was earlier, in the front room of the hostel to wait for our guide. Soon enough, he strides through the door.

From my travel journal,

“The walking tour guide is a skinny southerner with a guitar slung over his back and a deep green tweed messenger cap. He pushes a worn bicycle like a pro as he leads the, for lack of a better word, mob through the streets of Dublin. He tells me about his upcoming gig playing funk music at a poetry reading. His name is Lawrence. Actor by trade, making a few euros by showing us stumbling tourists the highlights of the city. His grasp of Irish history is only matched by his flaming patriotism for the authentic way of Irish life, marked well by his disgust for my Starbucks choice. I don’t blame him in the least.”

Lawrence leads us down twisting alleys and clamoring up rising and falling streets. Our first true stop is Dublin Castle. I’m bursting with excitement. Though I already know it is no castle of Sir Arthur, this will be my first-ever honest-to-god structure that can truly be called a castle.

Only one tower of the original structure remains, the rest being burned down, torn down, and replaced with an odd patchwork of gothic architecture brought over during the English occupation. As we stand in its courtyard, Lawrence launches into his soliloquy about the horrors of the English rule and the oppression faced by the Irish until they finally fought back for their independence. This tale stretches the rest of Dublin, across the river Liffey and the Ha’Penny Bridge,

past the statue of Molly Malone, 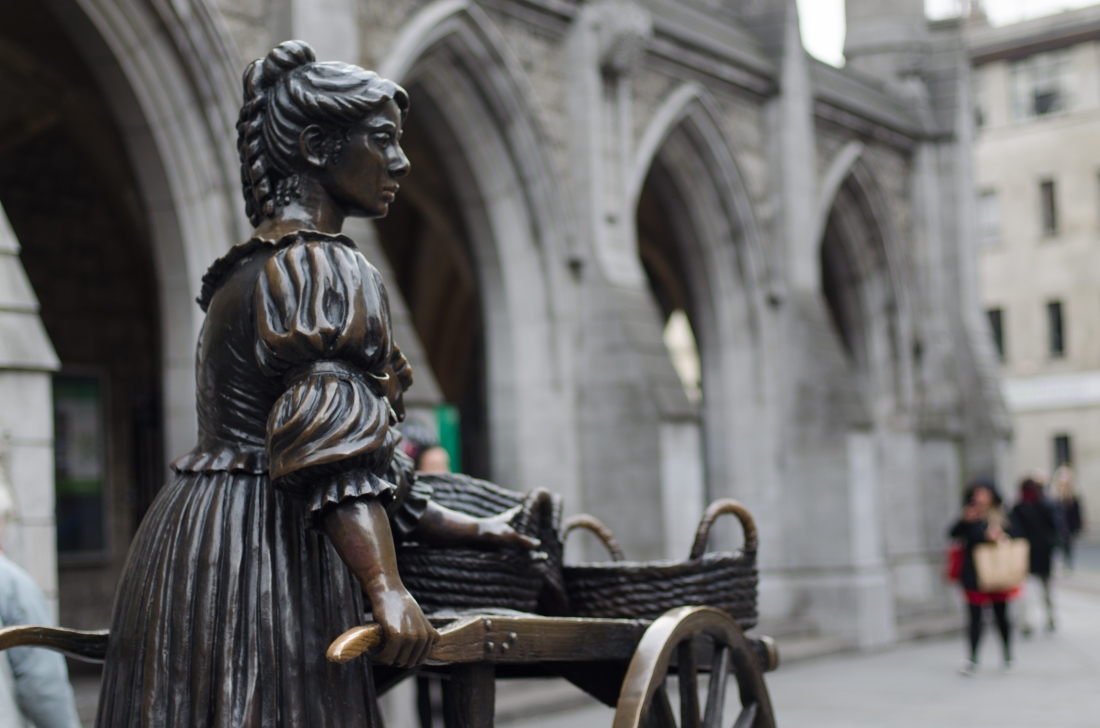 and through the claustrophobic streets which to this day I can’t distinguish.

We stop at a cozy pub for a warm beer and a bite halfway through our walk. I chat a bit with some of the other wandering souls on the trip, including one gent from England who had just moved to Germany to pursue a job in aerospace engineering and was in Ireland as a quick vacation. The Guinness is just as magical here as it was last night, and conversations with strangers are becoming just a touch easier. We than continue our ambling to Trinity College and finally the grasses of St. Stephens Green.

The 3 hours passed so easily, and the blogs were right, it was one of the best ways to familiarize yourself with the city. We tip Lawrence (hopefully) generously and he speeds off on his bicycle after pointing our lost soles in general directions of our intended destinations.

From My Travel Journal,

A bit of wandering around by myself after the walking tour proves I still don’t know the city as well as I’d like, and I make some very large circles before I find a landmark I recognize. And even a bit more wandering before I find a pub that’s not packed to the walls with other tourists. One thing is for certain, I didn’t come to Ireland to talk to Americans about Ireland. So I settle into a pub claiming to be the “oldest Viking pub” in Dublin (a fact that I can’t exactly verify) and order the beef and Guinness pie. When it comes to comfort food, the Irish have it down to a science. Always warm, meaty and filling. And topped off with a pint of that magical Guinness to keep the cold out. I put up with a terrible sexist joke from the owner, which is somewhat to be expected, the older generation Irishmen still seem a bit confused to see a woman on her own, and my accent certainly doesn’t help.

Finally making my way back to my hostel, I begin the planning for New Years Eve. Having been an active host in the Couchsurfing community back home, hosting young travelers passing through Baltimore from all corners of the world, I was excited to try out the community from the side of the traveler. I had joined a group within the community before I left that was specifically comprised of wanderers passing through Dublin on New Years Eve. We messaged back and forth to try to arrange a time and place for us all to congregate, never before having met in person or even been on the same continent at the same time before. But we were all sharing in the common plight of being vagabonds in a new city at the turn of the New Year, and that was enough to cast aside the trepidations of “otherness” we too often classify those we don’t know into.

The progression of the night is best summarized with yet another entry from my journal.

“The evening festivities commenced by meeting a group of couch surfers at the city center. We began as strangers but soon enough I’m dancing in a sweaty night club with a Malaysian-Canadian, a Hungarian brother and sister, one smoking a pipe and the other a tiny cigarette, a Polish girl, a German girl, an Irishman, and two spaniards who can’t dance to save their lives. We’re smoking inside and dancing our asses off. When the clock strikes midnight we hug and kiss and the Hungarians pause and sing their national anthem, apparently their national New Years tradition.”

My passport tucked snugly inside my bra (under the smaller boob of course, symmetry is crucial), wearing a thin sweater already a bit musty from being tightly wound inside my pack, myself and our band of misfits descended upon the streets of Dublin for an activity that defies cultural boundaries; drunken debauchery. We packed ourselves elbow-to-elbow into the famous Temple Bar, and then somehow found ourselves in what I can only describe as the Frankenstein of drinking establishments, Bad Bobs. The main floor was a spacious pub, decked out in heavy wood and glass. The next floor was something of a traditional bar, with neat standing tables and a small bar in the corner. The third floor was some strange hybrid of a dance club and a saloon, boasting large wooden columns wrapped in tiny “drink shelf” tables and a large, flashing DJ stand in the corner blasted the very worst of Western club music at an ear-splitting volume. Then finally, the fourth floor was an “international” lounge, with the skylines of 11 or so major cities decorating a panoramic ceiling, of which the centerpiece was a large, proud Budweiser decal about four feet wide. This hallowed space was also lit in nauseating blue and red light, but we tolerated it because it was the only space we could smoke indoors.

We all downed the shots we had been holding onto for this moment, our sweaty faces pinched as the Jameson burned down our throats. We then laughed, cheered, hugged and kissed. Except for Dina and Tamas, who were standing still, facing each other, holding hands and singing a rhythmic song in Hungarian. Once the song ended, they hugged and began to bounce about with the rest of us, explaining the Hungarian New Year tradition is that everyone stops and sings the national anthem at the stroke of midnight.

From My Travel Journal,

” A few hours later I escape some sweaty grabs from a Lithuanian on the packed dance floor and shuffle my way back to the hostel at about 2 am. With two roommates already asleep, I decide to see what parties were still raging on in the hostel. Sure enough, the wifi cellar is bustling with drunk Germans when I walk in, soon joined by many others stumbling in from the bars. A veritable U.N of drunkenness ensues, with at least 3 or 4 different languages being spoken at any time. I chat with a German gent about his distaste for American beer and the glory of, you guessed it, Guinness. About 4 in the morning I finally decide to pack it in, and call day 2 of Ireland/my journey an overwhelming success. “